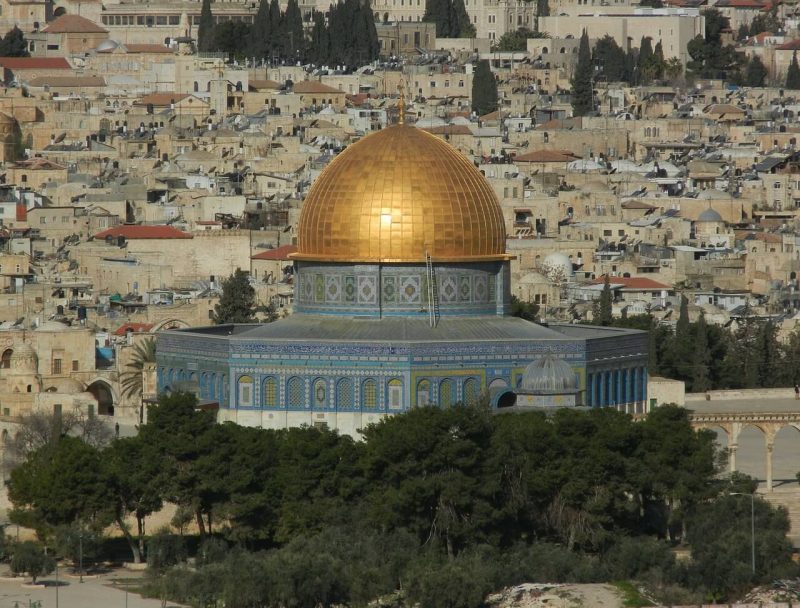 “Prophet of Allah,” she pleaded, grabbing him by his cloak, “Tell not the people this, for they will give thee the lie and insult thee!”

But he wanted to tell them — the Apostle of Allah (peace be upon him) — who wore that cloak. He wanted to leave her home and let them know. He did.

He ventured out into the dimly lit sky. He then announced that he had travelled to Jerusalem. That he had made a miraculous journey, leaving the Ka’bah the night before, and returning before the break of dawn. He conveyed his story loud and clear, with confidence of faith that had never been shaken.

“He’s a madman,” they must have told Abu Bakr (RA); he is insisting that he travelled from Mecca to Jerusalem and back, in one night.

Abu Bakr (RA) was hesitant, believing that the Quraysh were concocting a story to make his comrade look bad, but he then realized that they were relaying a true narration, in hope that Abu Bakr (RA) would have his faith shaken.

“If he said so, then it must be true,” declared Abu Bakr (RA), forever solidifying his faith in Islam and Prophet Muhammad (PBUH). His true test of loyalty also won him the title of Siddique, the one who always speaks the truth, a trait that is important for believers to emulate.

It was later that Prophet Muhammad (PBUH) brought his comrade away with a handful of other believers to narrate the full story of his journey. He had left out an important portion of his story. If the Quraysh had thought he was a madman with his travels to Jerusalem, it would have been death for Prophet Muhammad (PBUH) had they known about his ascension to the Heavens.

This was his full story, the story of Israa and Mi’raj.

To Jerusalem With Angel Gabriel

Standing before Prophet Muhammad (PBUH) was a beast not larger than a donkey but no smaller than a mule which also had wings. He was asked to mount it. The Prophet mounted Buraq — as the creature was called — and with a single leap, disappeared into the nearest horizon.

The first part of the journey is known as Al-Isra’ – The Night Journey – and this night journey was the journey to Jerusalem. Over the sands, Prophet Muhammad (PBUH) travelled, with Gabriel by his side. In their plight for Jerusalem, Buraq moved swiftly through the night sky.

At Jerusalem, Buraq descended at Al-Masjid Al-Aqsa where Prophet Muhammad (PBUH) met a congregation of Prophets – all Prophets before his time: Adam, Nuh, Hud, Idris, Salih, Joseph, Shuayab, Zachariah, Yahya, and the other Prophets mentioned in The Quran. He was asked to lead them in prayer in front of their Lord.

After their prayer ended, Prophet Muhammad (PBUH) was offered two vessels to drink: a vessel with wine and one vessel of milk. The Prophet chose and drank the milk, in which Gabriel responded: “You chose milk in accordance to the purity of your nature. You have received guidance and your followers too. Had you chosen wine, your followers would have been astray.”

In the Quran, Allah talks about the Israa’:

Glory to (Allah) Who did take His servant for a Journey by night from the Sacred Masjid to the farthest Masjid, whose precincts We did bless, in order that We might show him some of Our Signs: for He is the One Who heareth and seeth (all things). (Al-Isra 17:1)

The Israa’ is an important revelation because the journey across from one iconic Masjid to another iconic Masjid was an impossible feat for any person to experience, and only those who had faith in Allah would be able to reflect on such a journey.

The Ascension To Heaven

The same exchanges took place on the third and fourth levels of heaven with Prophet Joseph (AS) and Prophet Idris (AS) respectively. Prophet Harun (AS) made his testimony when met at the fifth level of heaven.

At the sixth level of heaven, Prophet Moses (AS) greeted Prophet Muhammad (PBUH), gave his declaration of faith and wept: “The reason for my tears is that a youth was commissioned as a Prophet after me, but his followers will enter heaven in greater numbers than mine.”

Needless to say, this wasn’t the only interaction with Moses as the Apostle of Allah would meet him again during his descent.

At the seventh level of heaven, Prophet Abraham (AS) was resting against Al-Bait Al-Ma’mur, a celestial house of worship, which seventy thousand different angels circumambulate daily. The Prophets exchanged greetings and Abraham gave his testimony of faith.

Prophet Muhammad (PBUH) was then led to Sidrat Al-Muntaha, a tree of Paradise, with a shade so far for the eye to see and with beauty beyond description. The tree is also known as the Lote tree or the Lote tree of the Uttermost End. This was the summit of the Ascension:

Near the Lote-tree beyond which none may pass: Near it is the Garden of Abode. Behold, the Lote-tree was shrouded (in mystery unspeakable!) (His) sight never swerved, nor did it go wrong! For truly did he see, of the Signs of his Lord, the Greatest! (An-Najm 53:14-18)

The Lote tree marks the roots of Allah’s Throne and marks the end of the knowledge of every knower, be he Archangel or Prophet or Messenger. The Lote tree also marked the boundary where no soul had passed before. It was there that Allah prescribed 50 daily prayers for Muslim believers and Prophet Muhammad (PBUH), after a meeting of such proximity descended through the layers of heaven.

He was stopped by Moses who was aghast at the number of prescribed daily prayers. He ushered the Prophet Muhammad (PBUH) to negotiate to lessen the burden. In some narrations, Prophet Muhammad (PBUH) made a few trips until the prescribed prayer was allocated at 5 daily prayers, and even so Moses was convinced that such a heavy burden would deter his followers from the faith. But the Prophet felt ashamed when the Lord stopped at five, thus the prescribed prayers for Muslims until this very day is five prayers as ordained by Allah.

It was time for descent and nearly dawn. Gabriel, Buraq and Prophet Muhammad (PBUH) descended to Jerusalem and made their way back to Mecca. As they crossed the sands, they overtook caravans on the way to the city.

Prophet Muhammad (PBUH) alighted at the Ka’bah and made his way back to Umm Hani’s home. “O Umm Hani, I prayed with you the last evening prayer. Then I went to Jerusalem and prayed there; and now I pray with you in the morning here.”

She grabbed him by his cloak: “Prophet of Allah,” she pleaded, believing every word of her cousin. “Tell not the people this, for they will give thee the lie and insult thee!” But he left anyway to spread the message of Islam.

To those who challenged him, Prophet Muhammad (PBUH) described Al-Masjid Al Aqsa in Jerusalem with such detail that it silenced them. To those who tested him even more, he mentioned South-bound caravans that were en route to Mecca – the number of them, the goods they carried, their conditions and their timely arrival. For some, it was too much to bear, and they began to believe. For others, they continued in their sordid ways. And it made sense for the Prophet to only reveal the Israa’ to those who had yet to believe as the Mi’raj would have been beyond their comprehension. It was later that Gabriel descended again to teach the Prophet the five daily prayers.

For the believers, the Mi’raj, the Ascension, represents a host of elements to the faith. The Ascent to heaven on its own is a feat to be reckoned with, the Prophet Muhammad (PBUH) traveling with a flying creature and an Angel. The Prophet nearing to the boundaries of knowledge at the Lote tree, venturing closer to Allah than no one has ever been before. Testimonies of faith by previous Prophets after praying with them. And lest we forget, the prescription of our daily prayers – the prayers that we perform daily – they were all prescribed during this Holy Journey.

Israa’ and Mi’raj was said to have happened towards the end of Rajab, just before the Month of Sha’ban, but it also took place after the socio-economic ban upon Muslims had just been lifted, the loss of great companions like Khadijah and Abu Talib, and the most bitter day of the Prophet’s life- the day at Ta’if.

However Israa’ and Mi’raj opened up opportunities for Islam to spread. Doors opened up in Medina, and a massive emigration took place, ending with the Prophet (PBUH) settling down in Medina and establishing the first civilization known to mankind.

Those stories alone are enough for believers to reflect on the plight of the Islamic faith, but Israa’ and Mi’raj divided those who believed in the ultimate truth from those who wished to stay in their ways. And it is a turning point for all believers, to remember the Majesty of Allah and Jannah, to remember that we know not what Allah knows and to adhere to our daily prayers, for us to attain Jannah and live as close as possible to the Prophets of Allah, with the same unshakeable faith.