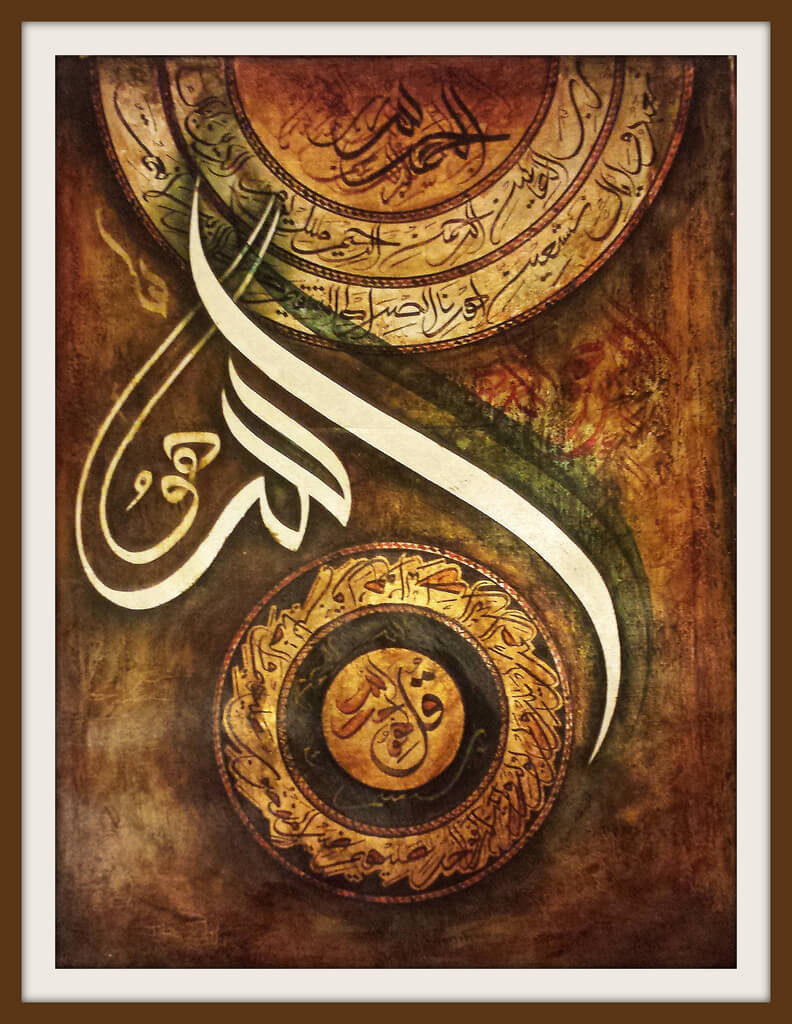 Surah al-Ikhlas, or “Purity” or “Sincerity”, is the 112th Surah of the Quran, consisting of just four verses. It is also referred to as Surah Tawheed (Monotheism) because this Surah summarizes the concept of Monotheism in a comprehensive manner.

It is one of the very few Surahs in the Quran whose name is not mentioned in the Surah itself; it has, instead, been named in view of its meaning and subject matter.

The Prophet (PBUH) sent (an army unit) under the command of a man who used to lead his companions in the prayers and would finish his recitation with (the Surah 112): ‘Say (O Muhammad): “He is Allah, the One.” ‘ (112.1) When they returned (from the battle), they mentioned that to the Prophet. He said (to them), “Ask him why he does so.” They asked him and he said, “I do so because it mentions the qualities of the Beneficent and I love to recite it (in my prayer).” The Prophet; said (to them), “Tell him that Allah loves him.”

This article provides full translation and tafsir of Surah al-Ikhlas, along with Arabic text.

First up, the full Arabic text of Surah al-Ikhlas: 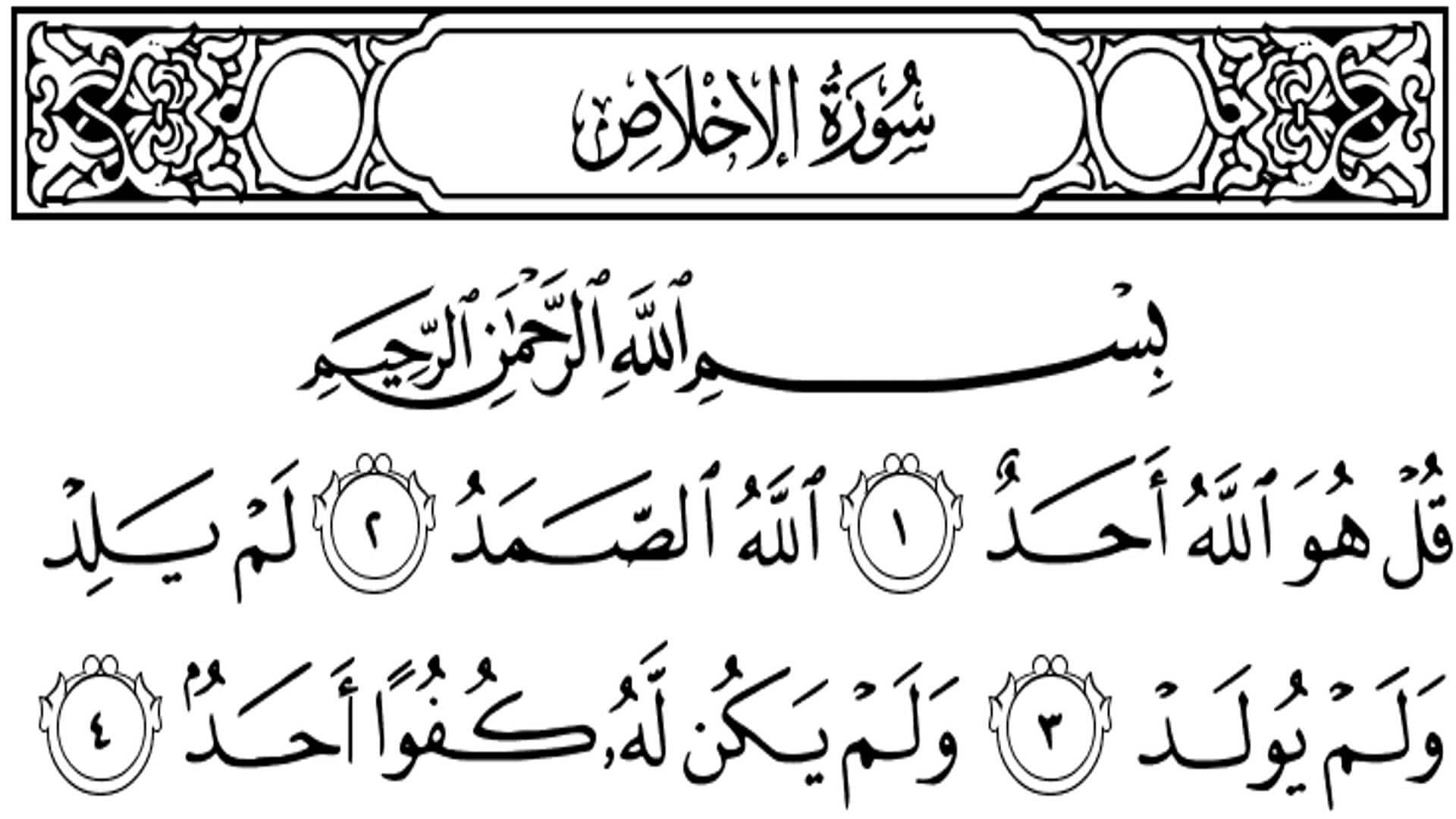 And now, on to the Tafsir of Surah al-Ikhlas.

This verse proclaims the Oneness of Allah. It sums up the essence of Islam, and negates all forms of polytheism and idolatry. The word “Ahad” meaning “The One” is used in the Quran only for Allah, and no one else. Allah says: [2]

Had there been within the heavens and earth gods besides Allah, they both would have been ruined. So exalted is Allah, Lord of the Throne, above what they describe.

Allah has no partners, associates, or helpers. Worship is directed solely to Allah, for He is the Only One worthy of worship. As Allah says in Surah al-Isra: [3]

And your Lord has decreed that you worship none but Him.

2. Allah, the Eternal, the Absolute!

In this verse, Allah refers to Himself by one of His Perfect attributes: As-Samad. As-Samad is also one of the Names of Allah.

Allah has been referred to as The Eternal Refuge, The Self-Sufficient, The Absolute, and the One on Whom all depend and to Whom all creation turns to for fulfillment of their desires and needs, by different translators of the Quran.

Therefore, while the whole world is dependent upon Allah for fulfillment of its needs, He is in need of no one. As mentioned in Surah an-Naml: [4]

Truly my Lord is Free of all Needs, Supreme in Honour!

3. He begets not, nor was He begotten;

This verse states that Allah was not born, nor did He give birth. In other words, He has no beginning and therefore no ending. Allah is the Creator of each and everything, but He was not created by any power.

One might wonder: isn’t it pretty obvious that Allah, the Ultimate Authority, is above everything else? Well, it surely is obvious. But many polytheists and idolaters wrongfully ascribe partners as well as sons and daughters to Allah (Nauzubillah!). However, this particular verse of Surah al-Ikhlas leaves no room for any uncertainty in this regard.

[He is] Originator of the heavens and the earth. How could He have a son when He does not have a companion and He created all things? And He is, of all things, Knowing.

None is more patient than Allah against the harmful and annoying words He hears (from the people): They ascribe children to Him, yet He bestows upon them health and provision.

Indeed, Allah is but one God. Exalted is He above having a son.

Say: “Praise be to Allah, who begets no son, and has no partner in (His) dominion.”

4. And there is none comparable unto Him.

The last verse of this Surah declares that Allah is beyond comparison. In other words, there is nothing comparable to Him in nature and attributes. There is none in the entire universe, nor ever was, nor ever can be, who is equal to Allah. He is Unique in every aspect. In Surah ash-Shurah, Allah says: [9]

Thus, this Surah gives a summarized description of the Oneness of Allah and the Perfection of His Attributes. Such is the importance of Surah al-Ikhlas that our beloved Prophet Muhammad (PBUH) equalled it to one-third of the Quran. As reported by Hz Abu Hurairah (RA): [10]

The Messenger of Allah (PBUH) came out to us and said: I am going to recite before you one-third of the Quran. He then recited: “Say: He is Allah, One-Allah, the Eternal,” to the end of the Surah.