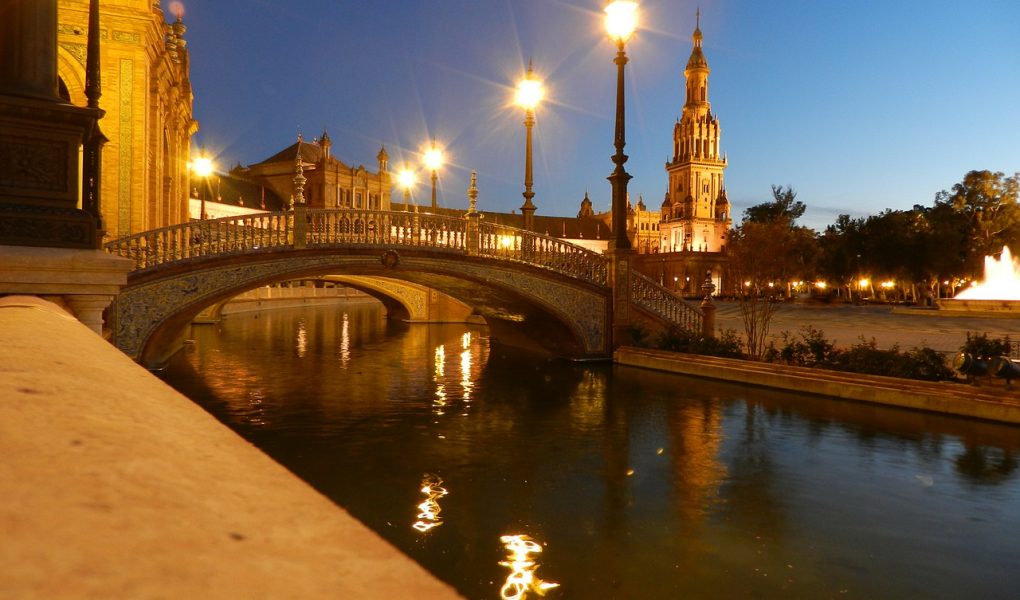 For centuries, Spain shone and progressed under Muslim rule. Unfortunately, the city of Seville fell prey to the barbaric onslaught of the Kingdom of Castile in the year 1248. Several innocent Spaniards were killed, many were forced to leave their homeland and seek refuge elsewhere, whereas many others were captured and taken as slaves. The rulers of Castile further destroyed remnants of Islamic life and culture, including masjids.

Abu al-Baqa al-Rundi was a contemporary Andalusian poet from the city of Ronda in south Iberia. In his poem, “The Fall of Seville”, he lamented the loss of a once great city, and further talked about the fall of Spain. Composed in 1267, this poem makes several allusions to Arabic and Persian classics, and to aid the reader, links to Wikipedia entries for the relevant allusions and incidents have been added.

Presented below is al-Rundi’s poem “The Fall of Seville” translated into English by James T. Monroe, followed by the original Arabic text of the complete poem.

“The Fall of Seville” (English Translation)

Everything declines after reaching perfection, therefore let no man be fooled by the sweetness of a pleasant life.

These are decrees that are inconstant: he whom a single moment has made happy, has been harmed by many other moments;

And this is the abode that will show pity for no man, nor will any condition remain in its state forever.

Fate irrevocably destroys every ample coat of mail when Eastern swords and spears glance off without effect;

It unsheathes each sword only to destroy it even if it be an Ibn Dhi-Yazan and the scabbard Ghumdan.

Where are the crowned kings of Yemen and where are their jewel-studded diadems and crowns?

Where are (the buildings) Shaddad raised in Iram and where is (the empire) the Sassanians ruled in Persia?

Where is the gold Qarun once possessed; where are ‘Ad and Shaddad and Qahtan?

An irrevocable decree overcame them all, so that they passed away and the people came to be as though they had never existed.

The kingdoms and kings came to be like what a sleeper has told about in (his) dream vision.

Fate turned against Darius as well as his slayer, and as for Chosroes, no vaulted palace offered him protection.

It is as if no cause had ever made the hard easy to bear, and as if Solomon had never ruled the world.

The misfortunes brought on by Fate are of many different kinds, while Time has causes of joy and of sorrow.

For the accidents (of fortune) there is a consolation that makes them easy to bear, yet there is no consolation for what has befallen Islam.

An event which cannot be endured has overtaken the Peninsula; one such that Uhud has collapsed because of it and Thahlan has crumbled!

The evil eye struck (the Peninsula) in its Islam so that (the land) decreased until whole regions and districts were despoiled of (the faith).

Where is Cordoba, the home of the sciences, and many a scholar whose rank was once lofty in it?

Where is Seville and the pleasures it contained, as well as its sweet river overflowing and brimming full?

(They are) capitals which were the pillars of the land, yet when the pillars are gone, it may no longer endure!

The tap of the white ablution fount weeps in despair, like a passionate lover weeping at the departure of the beloved,

Over dwellings emptied of Islam that were first vacated and are now inhabited by unbelief;

In which the masjids have become churches wherein only bells and crosses may be found.

O you who remain heedless though you have a warning in Fate: if you are asleep, Fate is always awake!

And you who walk forth cheerfully while your homeland needs you, can a homeland beguile any man after (the loss of) Seville?

This misfortune has caused those that preceded it to be forgotten, nor can it ever be forgotten for the length of all time!

O you who ride lean, thoroughbred steeds which seem like eagles in the racecourse;

And you who carry slender, Indian blades which seem like fires in the darkness caused by the dust cloud (of war),

And you who are living in luxury beyond the sea enjoying life, you who have the strength and power in your homelands,

Have you no news of the people of Andalus, for riders have carried forth what men have said (about them)?

How often have the weak, who were being killed and captured while no man stirred, asked our help?

What means this severing of the bonds of Islam on your behalf, when you, O servants of Allah, are (our) brethren?

O, who will redress the humiliation of a people who were once powerful, a people whose condition injustice and tyrants have changed?

Yesterday they were kings in their own homes, but today they are slaves in the land of the infidels!

Thus, were you to see them perplexed, with no one to guide them, wearing the cloth of shame in its different shades,

And were you to behold their weeping when they are sold, the matter would strike fear into your heart, and sorrow would seize you.

Alas, many a mother and child have been parted as souls and bodies are separated!

And many a maiden fair as the sun when it rises, as though she were rubies and pearls,

Is led off to abomination by a barbarian against her will, while her eye is in tears and her heart is stunned.

The heart would melt with sorrow at such (sights), if there is any Islam or belief left in that heart! 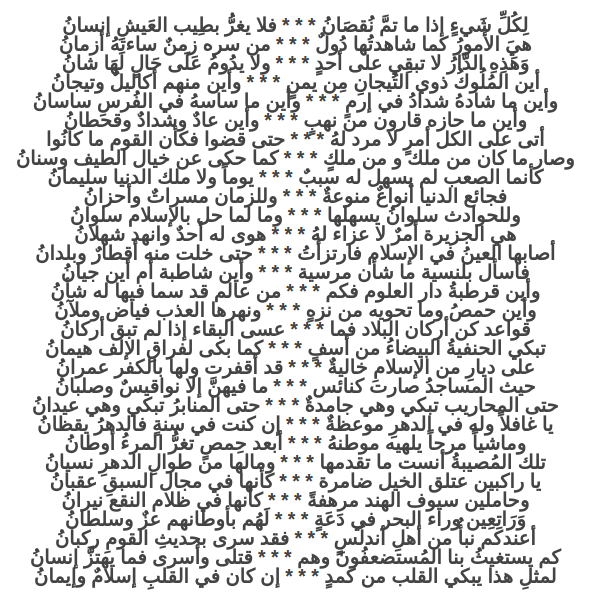 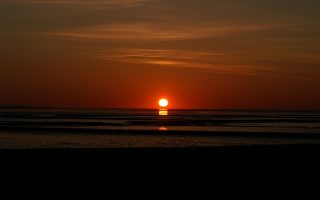 The Perfection of Imaan 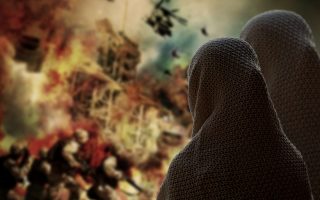 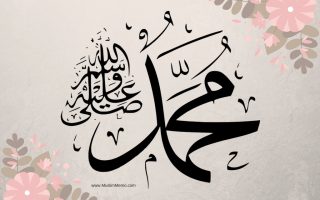 In Praise of Our Prophet